Understand how Object Detention allows you to narrow down your search to detect people and vehicles (bikes, cars and trucks) in the camera's field of view.

This feature allows you to narrow down your search to detect people and vehicles (bikes, cars and trucks) in the camera's field of view.

The first place you can see MV object detection is when viewing historical video and clicking on “Show Objects” on a single camera’s video page.

Objects detected as people will be enclosed by yellow boxes.

Vehicles will be detected in purple boxes as shown below. Only available on the second generation outdoor camera MV72s. 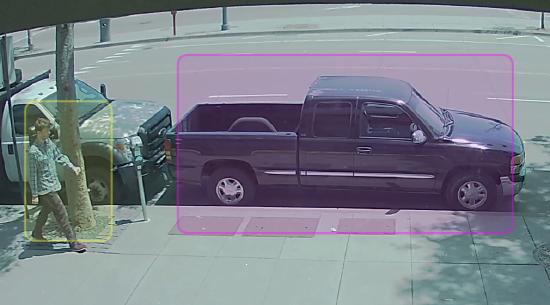 Time Resolution, Date, Start Hour and End Hour:
Configure the scale for the slices of your histogram and the time range for your analytics.

Object Detection by Zones :
If you have configured zones on your camera, you can also view the object detection analytics by zone. The zones feature is explained in more detail in the Zones section of this article.

Most Utilized Hour:
This value represents the hour that had the highest average occupancy.

Entrances (bar chart/histogram):
Presents the total number of entrances per hour/day for the hour/date range specified. This can be up to 24 hrs, 7 days or 1 hour - depending on the selected time resolution.

Total Entrances:
This value represents the number of entrances of objects detected within the scene.

You can set zones on your camera on the Zones page under your camera’s Settings tab. Use this to separate your object detection data according to areas within the camera’s field of view (FoV).